Councillor Warren Steel’s idea of a hotel on Chapman Reserve has largely not been met with the enthusiasm he had been hoping for (see our facebook page and a letter from Col Rathbone on page 6). Councillor Neil Reilly is hoping for a better reception for the three ideas he raised at the November Council Meeting.

One of them, the beautification of the area to the north of the North Kiama Neighbourhood Centre, he presented on behalf of the North Precinct, but the other ideas he has asked staff to report on are his own. 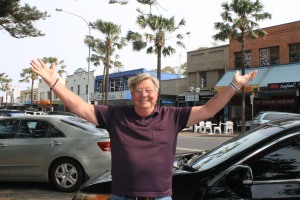 “I’ve asked them to look into planting Cabbage Tree Palms along the length of Bombo Beach,” says Cllr Reilly.

“They are native to our area and withstand the salt, but more importantly our First Nation people use the name, Dharawal, for their name and language.

“I think it would be a more appropriate symbol for the entrance to our town than perhaps a five story hotel [referring to a possibility for Bombo quarry favoured by the Mayor].”

His other suggestion is to look into the reinstatement of a Rocketship playground in Hindmarsh Park.

“This is pure nostalgia, as many locals have great memories of playing on the original one. It would be a great addition to our playgrounds.”

While these ideas have yet to be costed to see if they can fit into the budget, Cllr Reilly doesn’t think they should be dimissed out of hand for that reason.

“If we can spend half a million dollars on a boardwalk that may never happen, I’m sure we can find the money for a rocket.”

Cllr Reilly has already announced he will be standing for Council at the elections next September, despite his censure for misconduct.

“I’m looking for running mates and volunteers to help spread the word.”