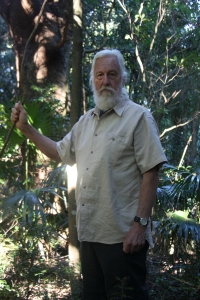 Long time environmental activist Howard H Jones is disappointed that, as he sees it, the ruling won in the Land & Environment Court by the Gerroa Environment Protection Society (GEPS) back in 2008 does not seem to have resulted in a much needed wildlife corridor.

“The Court thought the habitat corridor was so important it extended the buffer zone alongside the dredging pond to 50 metres,” he says.

“It was supposed to be planted out within three years, but 11 years after the court decision the habitat corridor doesn’t function.

“The plants that are there are still small as they haven’t been looked after as was required.”

Cleary Bros, which has owned the property at Gerroa and conducted sand mining activities within it for several generations, rejects those claims.

“It has involved the preservation of over 46 hectares of remnant forest and the re-creation of 24 hectares of ecological communities strategically designed to improve wildlife corridors in the region.”

A detailed landscape plan was part of the approval for Cleary Bros to extend its operations back then. It set out a timetable and required monitoring and fencing from wallabies to ensure the plants’ survival.

Without access to the site, GEPS has been monitoring the growth on the site using googlemaps.

“We estimate that in the critical Blue Angle Creek corridor the buffer varies between 25-38 metres, rather than the 50 required.

“It is a very important corridor because it connects a significant fragment of vegetation. Once it is disconnected, you lose the viability of habitats.

“We fought for this habitat corridor to be strengthened to compensate for the way the dredge pond has fragmented the vegetation.

“It seems that all the effort in the Land & Environment Court ten years ago hasn’t been honoured.

“The Gerroa community raised $22,000 to fund the case, they thought it so important.

“We expected the corridor would be built in accordance with the conditions laid down by the Courts.”

Cleary Bros says it relies on the expert advice of two independent ecologists that a functioning habitat corridor has been established. Copies of their reports are publicly available.

“Since 2008, Cleary Bros has undertaken and complied with our responsibilities for revegetation works as required by the Approval and accompanying Plans.

“With respect to the total plantings for the site, including the 50m buffer corridor referred to by Mr Jones, Cleary Bros has in fact exceeded the requirements of the Approval.

“That compliance has been subject to annual inspections and independent audits which have at all times found us to be meeting our obligations as required.”

GEPS has recently discussed its concerns with the Department of Environment, and is heartened to hear that a site visit has been undertaken to assess the situation. The outcome of this is not yet known.

The Department is currently assessing Cleary Bros’ application to expand its operations.

“The corridor will lie right next to the proposed new mine, so it will become even more significant,” says Mr Jones.

“The Greater Glider habitat in this fragment has been largely disconnected since the beach mine went through.

“In those intervening years, the Greater Glider population at Seven Mile Beach has been declared endangered.

“We are very concerned that some of the areas earmarked for rehabilitation back then will never actually happen, given potential conflicts with the new mine.”

With the Department of Planning left to adjudicate on the matter, as it is the enforcement agency for the conditions, Mr Jones remains concerned.

“We have been disappointed by our experiences with the Department in the past.”

He is hoping that GEPS will not have to take its case to court again.

Cleary Bros says, “We have always been proud of the many positive outcomes of this project to the environment and the wider community, of which the Cleary family and our employees form part.”