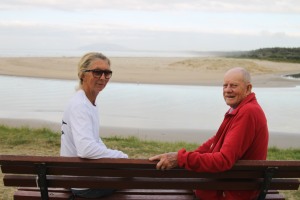 “We have a couple nesting in the dunes on Crooked River, near the bridge to the beach from Burke Parade,” says Sally Leonard, the local contact for the South Coast Shorebird Recovery Program.

“They are due to hatch at the beginning of the school holidays. It’s at that time they are most vulnerable.

“Their parents take them from the dunes down to the water. They are so tiny and almost the colour of sand.

“People can easily stand on them if they are not aware.”

She puts up fences around their nests to alert people using the beach.

The Pied Oyster Catcher (POC) is an endangered shorebird species with estimates of fewer than 200 breeding pairs in NSW.

As shown above, they are large black and white waders with brilliantly orange coloured legs and a chisel-like bill which they use to pry open oyster shells or dig for pippies.

Expert at camouflage, their nests are shallow scrapes in sand above the high tide mark, in dunes among seaweed, shells and small stones.

They lay two to three eggs between August and January.

At this time of year, Sally can often be found sitting on a bench at Ricketts Reserve in Gerroa, binoculars in hand, checking on these birds in the dunes across Crooked River.

She is often joined by Rex Worrell. At 91, Rex has been observing and caring for shorebirds in Shoalhaven Heads and Gerroa for 29 years.

In 2012 he was awarded an OAM for his service to conservation and the environment through the South Coast Shore Bird Recovery Program.

“Dogs are the major problem,” he says. “People don’t seem to read the signs and sadly sometimes we see them walking dogs on this beach.

“Dogs, especially off lead, are a great threat to all the shorebirds on Seven Mile Beach and in the Nature Reserve.”

Roy Schmidt, President of the Gerroa Community Association, also keeps a close eye on these shorebirds, as do many other members of the Gerroa community.

“While one POC couple are nesting in the sand dunes near Crooked River, the other couple are in the dunes between tracks 6 and 7.”

He says there is also a Masked Lapwing nesting in the Crooked River dunes and a couple of very small Red-capped Plovers have been spotted scurrying around.

“Last year for the first time we spotted four Sooty Oyster Catchers feeding on oysters in the river. They usually nest on headlands or rocky outcrops so aren’t regular visitors here.”

Roy calls for more community support to help these birds grow their chicks.

“Please help save these birds from extinction by respecting nesting areas and obeying the signs. There are stiff penalties for harming these birds or allowing dogs in prohibited areas.

“Dogs are a daily unknown here and even with signs, people just seem to be aware of how important this area is for these birds.”

Dr Daniel Lees, Coastal Birds Projects Officer for Birdlife Australia, praises the efforts of people doing their best to save these endangered birds.

“Shorebirds that breed on Australia’s beaches are under enormous pressure from human recreational beach use.

“I encourage people concerned about shorebirds to become involved in their local programs.”

Jodie Dunn is the Shorebird Recovery Co-ordinator, South Coast Branch, for the NSW National Parks and Wildlife Service. You can report any issues to Jodie on 0427 012 960 (Mon-Fri) or after hours on 131 555

If you see anyone interfering with nests, fences or signage, please text Sally on 0411 543 442