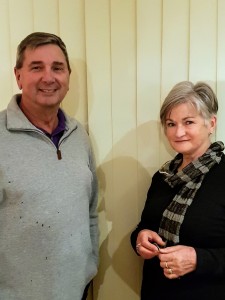 Veronica Dzelde has taken office as Kiama Lions President, the first woman to hold the role in the club’s 50 year history.

Known as a born organiser, and always up for a challenge, she is keen to look for different ways for the club to make a contribution to the Kiama community.

“My work has always been project management. mainly in service and people-focused industries,” she says.

Veronica takes on the presidency just two years after rejoining the club, having taken time out after eight years to concentrate on helping Roo Theatre.

“When my husband and I came to Kiama we joined Lions to become part of the community,” she says.

“I rejoined because I really wanted to be connected with what is happening where we live.”

Internationally there are many women in Lions, and the Kiama club now has growing number of women joining after what was a slow start.

“It is no longer an issue,” says Veronica.

“We’d like even more women to join so we have a cross pollination of ideas.

“In the past, so much of what we did was blokey – building fences, doing gardens, setting up bbqs – but with all the rules around that now we need to look at how we can make a contribution differently.”

With the average age of its members in the late 70s, Kiama Lions is also looking for ways to attract younger members.

“My mantra on that is we need to make a club that people want to join, rather than get people to join and then make the club change.

“We are really open to ideas from the Kiama community on how we can help them in practical ways.”

She cites their Driver Reviver (which is now back in action) and the Carers’ Cottage as examples of the sort of service initiatives that Lions can achieve.

“The Carers’ Cottage has been the most amazing project, and we are so pleased it is now really ramping up again.

“The whole community got behind supporting people who need a holiday at the beach.”

The last time club members got together in person was for their 50th celebration in mid- March, just before the restrictions came in.

“We are really looking forward to getting back together for the first time on 23 July.”

Veronica welcomes anyone interested in finding out more about Lions to call her on 0439 383 487.