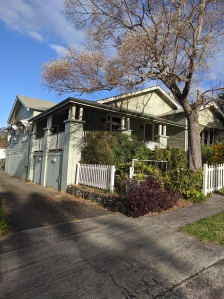 Nick Daoud’s DA for a mixed use residential development, with 25 apartments above four shops, has met a roadblock, with Kiama Council imposing an interim heritage order on 66 Collins St.

The interim order gives twelve months for the house’s heritage significance to be assessed, as part of the heritage review of the Kiama Town Centre.

“I think this cottage is worth looking at from a heritage perspective as it was built for and lived in by a local significant family, the Hindmarshs,” says the President of the Kiama & District Historical Society, Sue Eggins.

The house was built in 1925 for Sarah Hindmarsh, after the death of her husband Michael Nesbit Hindmarsh of Rosebank House, which stood in Terralong Street.

After Sarah’s death the house was passed on to her son, Nesbit Evans Hindmarsh and then on to his son, Doug Nesbit Hindmarsh and his wife Sarah.

The house went through the hands of a number of local families, including the Warnocks, of Kiama Supply Company, and the Robsons.

It was later bought by two of the partners of Kearns and Garside Solicitors, and the firm operated there for many years, more lately under the name RMB Lawyers.

66 Collins St and adjacent properties were sold to Mr Daoud when he was devising a logistics solution for his proposal to develop the adjoining Akuna St/Mitre 10 site, owned by Council.