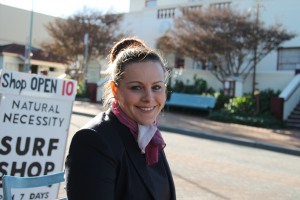 The long anticipated return of a bank to Gerringong has now been pushed back to ‘by the end of the year’, due this time to delays associated with COVID-19.

“We’ve finally got the $10 million in business that we need to make the sub-branch viable from the start,” says the Chair of Bendigo Bank’s Oak Flats Community Bank, Geoff Egan.

“Ideally we would like to open for the 20th anniversary of the opening of the Oak Flats operation in September.”

It was decided last year that the best structure to use to get banking services back in the village was to make the operation a sub-branch of the Oak Flats franchise.

It had been hoped to open by early 2019/20, but sluggishness in getting business on the books, coupled with the need to increase that target from $5 million to $10 million due to reduced margins, meant that deadline was not met.

A concerted effort by the bank, dedicating the time of its Business Development Manager Amanda Morris to the area, resulted in the $10 million – largely in home, investment and business loans – being met.

“We were expecting to be open by now, but COVID got in the way,” says Ms Morris.

“The Property team haven’t been able to do their plans.”

She can see why people might be frustrated that the process has taken so long – ANZ, the last bank in Gerringong, closed in January 2018 – but says she understands what has been happening behind the scenes and the reasons for the delays.

“People are really looking forward to it opening, and I’m encouraging them to get themselves organised with us before the rush when the doors open.”

The bank is in the process of finalising a lease for the old Baby Health Centre in the Town Hall from Council.

Initially, the branch will be open two days a week.