The Manager of the Surf Beach Holiday Park,Gordon Tolman, by the new pool

The easing of travel and dining restrictions just before the June Long Weekend resulted in a huge shot in the arm for local tourism and hospitality businesses.

The new manager of Council’s Surf Beach Holiday Park, Gordon Tolman, says the pent up demand for a holiday was evident immediately a date was set for the travel restrictions to ease.

He knows the area well, having managed Council’s Seven Mile Beach Holiday Park for the last three years (a role he still holds).

Within two days of news that restrictions were being lifted on June 1, all of the accommodation at both holiday parks was booked out.

He says the properties are in peak condition, not only because of the over $4 million refurbishment of Surf Beach, which was completed before Christmas, but the extra maintenance and improvements that have been done while the parks were closed.

“People who can’t travel overseas are looking for other quality destinations.”

Karen Ronning, Manager Destination Kiama, is very happy with the way people flocked to the region.

“We understand that all accommodation was booked out, which was what we wanted to hear,” she says.

“From a tourism perspective it was great to see the area back to its vibrant self, and for us to have the opportunity to welcome visitors back.

“The weekend demonstrated the affection people have for our area, by their willingness to return so quickly.”

Major strategic promotions of our area, organised by Destination Kiama staff during the down time, are to begin soon.

These include campaigns and partnerships with influential travel guides: Time Out, Broadsheet and Australian Traveller.

“The timing is perfect in the run up to winter, which we want to be busier than usual this year.”

The influx of visitors faced a new reality, as hospitality businesses had reduced capacity to service their needs.

After being deserted for months, the footpaths were suddenly crowded as people waited to be served.

“It was one of the busiest weekends we have ever seen – as crazy as I’ve seen it at Christmas and Easter,” says Pete Henderson, who started his Penny Whistler Cafe almost five years ago.

“People just exploded out of the gates of Sydney.

“They were just so happy to be out and about.”

Whereas he could sit just under 60 inside before COVID-19, his cafe is now limited to 22 inside plus its outdoor seating.

“When it was just 10 seats, it was hard to manage and make it viable.

“The extra seats and our new system of managing bookings into timeslots makes it viable, but there is a lot of extra work.

“It’s worth it though, as we don’t want the health situation to go backwards again.”

Mel Matters of Gerringong’s Hill Bar and Kitchen, and its offshoot Gather, says Gerringong was just as busy.

“We had to knock a lot of people back, as we can now only have half the number of people we used to,” she says.

“Everyone was so happy to be out. They came from everywhere.”

Her venues have also introduced timed bookings as a way of managing the new restrictions.

Sarah and Melissa of Toyworld in Kiama

A veteran of Terralong St retailing for 35 years, Melissa Judd of Toyworld says it was a much better long weekend than the previous year had been for them.

“Sydney people hadn’t been out for a while, not even to the shops.

“Everyone was really respectful of the distancing rules in our shop, although it got a bit busy in the street with people waiting for food.

“Some of the other shopkeepers tell me they are just catching up now.

“I only hope we can get back to normal soon.”

Many venues and businesses around town have used the down time to complete renovations, a sign of confidence in the future. 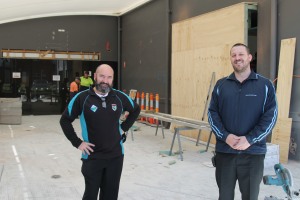 Steve Willis, President of the Kiama Leagues Club (left) with the Club’s Manager Jesse O’Brien amidst the renovations

Kiama Leagues Club is going ahead with its planned $1 million enclosure of its back deck area, to substantially increase its bistro operations, despite only being able to have a total of 100 people in its premises at the moment.

“Food is a real focus of what we are going to do in the future,” says the Club’s President Steve Willis.

“It’s been good timing to get it done now.”

He is expecting the Club’s revenue to drop 25-30% for the year, but despite this he expects it to finish the financial year showing a small profit given they were heading for a record year before the pandemic.

The question on everyone’s lips is what is going to happen in September, when the JobKeeper and JobSeeker are due to end.