Kiama will get the chance to remember Woodstock when the 50th anniversary of the world’s most famous music festival is celebrated with a tribute show on the Saturday afternoon of the Folk by the Sea festival.

The Woodstock Tribute is shaping as one of the highlights of the three day festival, which this year features 51 international, national and local acts.

The Pavilion will reverberate to songs by the iconic bands and performers who featured at Woodstock in upstate New York back in August, 1969. They included Crosby, Stills, Nash and Young, Creedence Clearwater Rival, Joan Baez, Joe Cocker, The Band, Canned Heat, Arlo Guthrie and Jefferson Airplane.

The Woodstock songs will be performed by popular Kiama band The Water Runners; the Carefree Road Band, which has a strong local flavour with four members living in the area; Kiama musician Penny Hartgerink; and Sydney duo Buck and Deanne.

Kiama Councillor and Woodstock tragic Neil Reilly, who will MC the concert, says he’s been growing his hair especially for this celebration.

John Tubridy, from the Carefree Road Band, is coordinating the concert and says the performers have chosen a wide range of songs and performers for their sets. 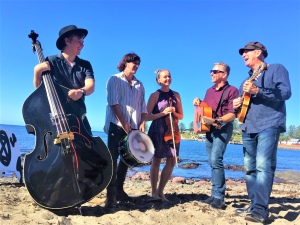 “Our aim is to capture the great songs and great artists that made Woodstock famous.

“But most of all it’s about having fun and getting the audience up and dancing.”

It’s also about celebrating the Woodstock generation, and John is hoping the audience will dress in clothes from the era, such as floral shirts and bell-bottom pants.

A former Gerringong resident, John will be joined by Kiama residents Mark and Louise Raue, Joel Robards and Chris Paton when he performs in the Carefree Road Band.
The band will play Woodstock classics ranging from Joan Baez’s We Shall Overcome to Canned Heat’s Going Up The Country and Creedence Clearwater Revival’s Proud Mary.
John Littrich, singer with the Water Runners, says he was just three years old when Woodstock was held, but he loves the songs from the era.

Penny Hartgerink was born almost two decades after Woodstock but grew up in a home where music by Woodstock-era bands was staple fare.

“Bob Dylan might not have played at Woodstock, but his songs were covered by other artists, so I have chosen one of favourite Dylan songs, I Shall be Released, which was performed at Woodstock by both The Band and Joan Baez,” she says.

Her other songs are from The Band, and the Johnny Cash classic Ring Of Fire, which was performed at Woodstock by Country Joe McDonald.

Tickets are now available at on the festival’s website, with a three day Early Bird offer of $90 ending on September 26. Day and session passes are also available.