Friends of the Minnamurra River are organising a meeting to keep the community abreast of its campaign in opposition to the extension of Boral’s sandmining operations at Dunmore (reported extensively in our last issue).

With the strong support of Kiama Council and the Minnamurra Progress Association, it is calling for the proposal to be assessed as a new DA, rather than a modification.

This will require an Environmental Impact Statement to be conducted, and will put the project under the stricter provisions of the new State Environmental Planning Policy for the
Environment. 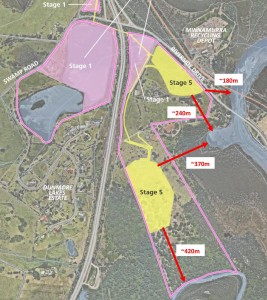 A map showing Boral’s current operations at Dunmore and the proposed new sites (in yellow), with distances to the river. Supplied by Boral.

Shellharbour Council, which controls the land where the pits are proposed (to the south and east of Dunmore House) has joined Kiama Council in opposing the modification.

Its submission to the Department of Planning and Environment said, in part, “Council’s position is that the proposal, in its entirety, should be treated as a new development application, as the proposed works are considered to be substantially different than the original approved development.”

A petition, which will be presented to the Upper House by Independent MLA Justin Field, is being circulated within the community as well as online at change.org

It requests the Government to “oppose the Boral proposal and any new sand mining that risks the environmental, recreation and tourism values of the region.”

Planning is also underway for a ‘paddle out’ on the river on Sunday 7 July to show community opposition to the proposal.

Boral believes much of the opposition to the project is misinformed, with the facts distorted and misrepresented.

As spokesperson said, “At all times in communicating the Stage 5 proposal, we have been absolutely clear no sand will be extracted from the river nor its immediate surrounds.

“The extremities of the proposed extraction pits will be 180 metres and 370 metres away from the river corridor.

The proposed Stage 5A is further separated by Riverside Drive which sits at a higher level than the extraction area.

“These distances provide a significant buffer between the two in recognition of the need to protect the main river body and its environs.”

Boral says there is no risk to the River’s water quality, because the self-contained water management system is disconnected from the waterways.

It also says its application has fully addressed conservation, traffic and dust issues.

As for the use of a modification, the Boral spokesman said that progressing that way was a decision made by the Department of Planning & Environment.

“It is not, as suggested by some in the community, a decision which can be made by us.”

Details: The Public Meeting will be held on Thursday 27 June, 7pm, at the Minnamurra School Hall