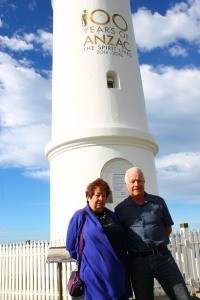 The first Ian Clifford, President of Lighthouses of Australia Inc, heard about the plan to keep the ANZAC Centenary logo on Kiama Lighthouse permanently was when he read about it in The Bugle.

At their April meeting, Kiama councillors unanimously gave their support for the commemorative logo remaining indefinitely on the side of the Kiama Lighthouse. A licence will need to be obtained from Crown Lands for this to occur, as Council does not own, control or maintain the heritage listed building.

The current licence for the logo expires on 30 June.

“I was worried this would happen when the idea was being first mooted in 2013, but was reassured in writing it was only to be for the duration of the commemorations,” says Mr Clifford.

“There was no consultation with the community before this latest decision was made.”

Lighthouses of Australia is an association working to protect and promote Australia’s lighthouses, their history and heritage through hands-on maintenance and preservation in cooperation with various state and federal bodies.

Having recently completed the maintenance on the Kiama lamps, Mr Clifford was waiting for the decal to come down before giving the Lighthouse a repaint.

“We were against the original idea, and keeping it indefinitely is totally overstepping the mark,” he says.

“There isn’t another lighthouse in the world where this would be allowed.”

The President of the Kiama & District Historical Society, Sue Eggins, shares his concerns.

“It wouldn’t matter what organisation, what charity or what business was involved. There simply shouldn’t be any advertising on the Lighthouse.

“Having the logo on it is giving the impression of a false ownership.”

“The number one issue I have is it is handing ownership to the RSL by branding the building and turning it into a war memorial when it is not.

“We’ve done the research and there is no reason for linking the history of this lighthouse to the military.”

The National Trust shares their concerns, and has written to Council and the State Minister saying it does not support any permanent signage being displayed on lighthouses.

“It is important to acknowledge the prime function and heritage value of the Kiama Lighthouse. It represents the coastal shipping era of the 19th and 20th centuries, which was instrumental in the economic development of the South Coast and the Colony of NSW,” says the letter.

Instead of a permanent sign, Mr Clifford has always championed using the Lighthouse to project images on during special events or ceremonies, with the smoothness of the Lighthouse’s design making it an ideal screen.

“We’ve done this in the past, for causes such as the SES, Breast Cancer and the Red Cross, but the logo is preventing it happening.”

He says this would be particularly effective at Kiama’s Dawn Service, which is now held at the Lighthouse.

Late last year, a plinth and plaque was unveiled just outside the Lighthouse perimeter to commemorate the Centenary in a lasting way.

The NSW Government, which manages the Lighthouse, has advised Kiama Council it is reluctant to approve retaining the logo, based on submissions received.

Council will reconsider the matter at its next meeting on 25 June.