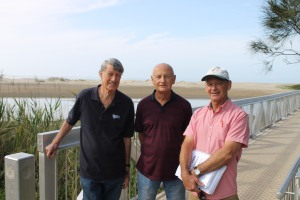 Brian Pickett, Roy Schmidt, and Stephen Brazier are among those who want Zone A abolished

A sub-committee of the Gerroa Community Association (Roy Schmidt, Brian Pickett and Stephen Brazier) and the Werri Boardriders are calling on Council to remove Zone A, the area of the beach between the river and Track 1 from Gerroa Road, as a designated surf school area.

“We think allowing three surf schools in Zone A is too much of an imposition on the general public and we’d like to see Zone A abolished,” says Mr Brazier.

Dr Leoni Degenhardt, a long term resident of Gerroa, also has concerns about safety on the road and beach, and issues of public access and amenity. She too wants to see an end to Zone A.

“Expanding the activity of commercial surf schools at this end of Seven Mile Beach would seem to be promoting business at the expense of public access and amenity,” she says.

The issue has arisen as the surf schools have submitted DAs to Council as part of a new process to obtain a short term allocation of the surf school places on Seven Mile Beach (see sub-article at bottom of page).

The activation of Zone A as a surf school area has become an issue with some locals since Rusty Moran’s Gerringong Surf School was granted a licence to use the beach late last year. This finally legitimised an activity he had been conducting there for around a year.

Prior to his arrival, despite having permission to do so, other surf schools have only used Zone A on the odd occasion.

The sub-committee has issue with the way Council’s Surf School Policy was replaced by Interim Surf School Guidelines in October last year, without community consultation, when each of the three surf schools were given interim licences (Gerringong Surf School, Surf Camp and Lands Edge).

“The old policy was devised after years of consultation,” says Roy Schmidt.

“It has been replaced with an abbreviated version that has taken out some very important aspects, and even changed the zone boundaries, without the community being involved.”

The Interim Guidelines extend Zone A south by 150 metres, so it now stretches south from the river to Track 1, and includes the most popular take-off point for windsurfers. The Zone had previously stopped at the footbridge.

Council says the Interim Guidelines will be replaced by a Plan of Management, the development of which will include community consultation (see box on page 6).

With the Plan of Management not expected to be ready until June 2021, the sub-committee is concerned about what may happen in the meantime.

While the surf schools say they are not looking to expand, Stephen Brazier says he can only go on what is allowable in the Guidelines.

“The previous policy has been revoked and the Guidelines allow for significant expansion.

“For example, the old policy said only three surf schools could operate on the beach, but now it says three schools can operate in each of the three zones, allowing for the potential of nine schools.

“The Guidelines are poorly written, but we ignore them at our peril.”

Brian Pickett agrees, “We can’t take assurances it will never happen when it is allowed. As businesses grow they generally want to maximise the potential to its full extend.”

The way that Gerringong Surf School has been operating in Zone A is also concerning residents, particularly a perceived lack of compliance with the guidelines and safety issues.

“He never puts up the operational flags he should, and always puts up promotional signs he shouldn’t,” says Roy Schmidt.

“His classes don’t keep to the 40 metre operational area or to maximum numbers, he periodically utilises Little Beach and Crooked River which are exclusion zones, and he often has his vehicles on the beach.

“The old policy had a three strikes and you’re out rule, but this is missing from the Interim Guidelines.” 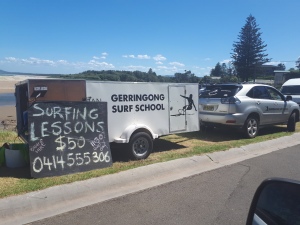 Mr Moran rejects criticism of non-compliance, saying the lack of flags required to mark the edge of his operation was an oversight which is being rectified.

“The Ranger has told me I should park on the beach, and I’ve been told that if no other surf school was using the zone I could have up to 40 people and still be in the allocation.

“People should refer their concerns to the Council Ranger if they have any issues. It sounds like people are complaining for the sake of it.”

The Bugle did check with Council whether Mr Moran could utilise the full allocation for Zone A if no other school was using it.

“Surf schools are required to operate under the terms of their individual licence.”

He believes the South Precinct has deliberately misrepresented the effect of the DA process as creating an expansion of the surf school places. He says only one zone can be used at a time and only three schools are permitted, not the nine suggested by the Precinct.

“I believe they have exaggerated the impact to get more support for their petition.

“Zone A is the best place for my surf school, and I want to continue to mainly operate from there.

“It is the best place because it has the smallest waves and provides the most convenient access for the parents of my young students.

“My DA has 120 letters of support from my customers.” 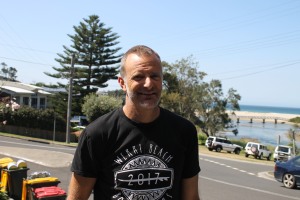 Guy Olbourne has been operating his Surf Camp at Gerroa for twenty years, and over that time he says he has rarely used his Zone A licence.

“As a local, I know how sensitive the community is about using that busy end of the beach, and we use it only occasionally for private lessons.”

Credited with founding now worldwide surf camp industry, Mr Olbourne is proud of building a business that last year attracted around 6000 learner surfers to the area, as well as teaching young locals, and his use of other local businesses to provide goods and services.

While Mr Olbourne is uncertain of how the licences will be allocated in this new process, he hopes his track record as a professional operator will play a part in the assessment.

Prior to this, he has obtained his allocation through a tender process, and most recently had a licence for five years.

His DA is applying to use Zones A and B with the maximum capacity that is allowed (40 and 60), and has nominated for 60 places in Zone C.  In the application, it states that Zone A and Zone C will only be used when Zone B does not have the appropriate conditions.

“This is not about expansion, but allowing us to keep the business we have worked hard to build.”

Council is unable to charge the schools commercial rents until the Plan of Management is approved, and is restricted to charging a one-off licence fee of $438. Surf Camp has previously paid in excess of $30,000 p.a. to use the beach.

The Plan of Management

Council is unable to comment while the DAs are being assessed,  but it has issued the following statement to clarify the process: Kiama Council has started drafting plans of management for Crown Land parks and reserves as required by the new Crown Lands Act introduced in 2018.

Drafting of these plans of management will involve community consultation.

These plans of management are due to be finalised by June 2021.

Council is assessing applications from surf schools for short-term licences, as prescribed under the new Crown Lands Act, to allow them to operate until the plan of management for Seven Mile Beach is finalised.

These short-term licences involve standard fees and charges as a commercial based expression of interest process cannot be undertaken within the timeframe for plans of management to be in place.

This plan of management will replace the interim guidelines. It will also allow Council to issue long term licences for surf schools.

This transition process was endorsed by Council in September 2018.