A time capsule buried in 1969 to mark Kiama Bowling Club’s first fifty years has been removed in preparation for its opening at the first celebration to mark the Club’s 100th year.

The time capsule contains historical items and records of the Club, and perhaps a few surprises.

Club Director and chair of its History Committee, Bronwyn Campbell, was there to see it buried and so was her father, Trevor Jones.

Having recently turned 90, Trevor will be there, along with many people whose families have had a long association with the Club over the years.

In March 1919 over 30 local residents held a public meeting to declare an interest in forming a bowling and recreation club. The Club was formed in May and the land on the corner of Noorinan and Shoalhaven Streets was purchased for £180. 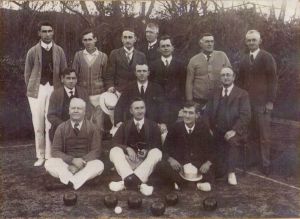 By 1921 the Foundation Members had established a clubhouse, a green ready for play and a croquet lawn. The following years saw more greens added and a new clubhouse built.

The Sixties, Seventies and Eighties were the heydays of the Club, when it played a pivotal role in the sporting and social life of the town.

Events are being organised each month throughout the year to mark the centenary.