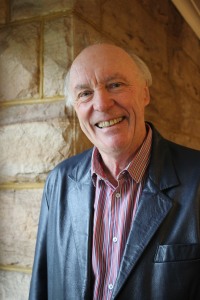 Bucking stereotypes, the new President of the Kiama Show Society, David Barnes, isn’t from a farming background or even a long standing resident. Instead, the retired engineer moved down to Kiama full-time only 10 years ago after buying a house in Kiama in 2001.

“I started helping out with the Show around that time, as it seemed a great way of getting involved with the community,” he says.

“I served my apprenticeship and took on the job of ground steward.

“It was a great way to meet people, and support the town.”

He has taken on the presidency at a time when farming is continuing to change in the area.

“The future of farming as I see it is the development of specialist, value-add businesses,” he says.

“The Pines dairy is the one I hold up as an example. They’ve gone from selling bulk milk to making a specialist product. That is probably the future of agriculture in the area.

“If we want to keep the rolling hills, we have to develop niche markets that command a premium. The double benefit from that is we will continue to be an attractive area for visitors who want a food experience to match the scenery.”

As for the Show, David believes it also has to evolve, while maintaining its agricultural and horticultural roots.

“We are already a mini-Royal Easter, but we’ve got to think about what sort of demographic we want to appeal to and offer suitable attractions.

“We are considering a lot of options that will make it a must-do for the community, and welcome ideas from the public on how to make the Show sustainable in the long term.”

The Society’s Kiama Artisan Food Festival is an initiative reflecting his views that has grown legs, and gained State Government funding.

“The aim is to lift people’s appreciation of what is on offer from small scale producers within 50km of here, and encourage new producers,” he says.

“There are a lot of people in Kiama interested in artisan skills, and this is a way to bring like minded people together.”

There will be a series of workshops on subjects including cheese making, sausage making and fermenting, as well as appreciation classes on craft beer, coffee and local wine.

“We’ll also have a market not just offering food, but also equipment for making artisan food, such as smokers.”

The Festival will open with a 50km Dinner on the Saturday night, under the direction of Mark Olive from SBS’s cooking program featuring indigenous food, The Outback Café.

Entry to the Festival is free, however there will be a charge for the dinner, workshops and classes. Tickets can be purchased online. Places are limited.