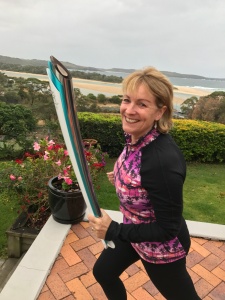 Heather McAlpine got the news she had been selected as a Queen’s Baton bearer on her late father’s birthday.

“It was very special for me, as he was a torch bearer at the Melbourne Olympics in 1956 and our daughter Melinda followed the tradition at the Sydney Olympics,” she says. “Unlike him, we didn’t have to be able to run a mile in under six minutes to be selected.”

Instead, the well known relationships counsellor from Minnamurra was selected for the Kiama leg for her fundraising work for the community. Other locals to receive the honour are Col Rathbone, David Leigh, Kath Tanner and Nick McInerney from Kiama, Lloyd Ferguson from Gerringong and Gerroa’s Sally Fitzgibbons.

Kiama is one of just four communities on the Baton’s route from Sydney to Melbourne. Beginning at Kiama Leisure Centre at 12.58pm, 15 Baton Bearers will each carry it along the route down Terralong Street, around Blowhole Point and into Kiama’s Showground Oval.

It will continue its journey south aboard HMAS Albatross’s new combat helicopter.

The community is encouraged to line the route and join in the ceremony and festivities at the Showground.

Details: Monday 5 February. Activities along route and at Showground, with the Baton arriving there at 1.40pm and heading off around 2pm