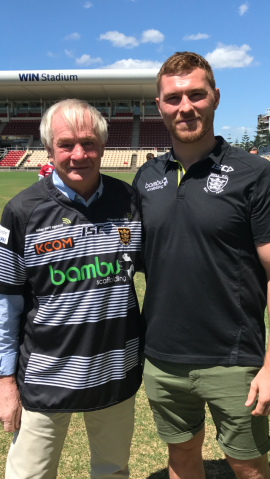 Kiama is about to be invaded by the Black and White Army! And they are keen to meet the locals.

Hull FC, the UK’s 2016 and 2017 Challenge Cup Winners, will be making Kiama their home in the week before their clash with English rival Wigan at WIN Stadium on 10 February.

It is the first time an English Super League match has been held outside of Europe, with the teams then lined up to play the Dragons (v Hull) and the Rabbitohs (v Wigan) at ANZ Stadium.

Kiama is expected to become awash with die-hard Hull supporters during this lead up time, no doubt pleased to escape the English winter. Some will be enjoying a double-header, after being here for the Ashes series.

Apart from ensuring they are match fit, the team, who will be staying at the Sebel Harbourside, will be sharing their skills with young players, doing some sightseeing and meeting the locals.

The first big community event will be at the Kiama Farmers’ Market on Wednesday 7 February, which coincidentally, it is the Market’s 4th birthday.

There will be an opportunity to meet the players, enjoy a gourmet bbq of local food, enjoy live music and beach activities, and even watch (or participate) in a prawn peeling competition.

You’ll be able to see the players in action at an open training session earlier that day (location yet to be announced).

The team will also be at Surf Beach at noon on Sunday after the match on Saturday, before they go to the Stomping of the Grapes at Crooked River Winery.

An official welcome has been organised at the Sebel on Thursday 8 February by Destination Kiama for the tourism industry (ticketed event).

“By getting behind this major event, we are not only showing what a great place this is and the friendliness of our people, but sending a giant postcard to the people watching back in the UK,” says Mayor Mark Honey.