Nick Daoud at the Bathers site

As the earthworks on Nick Daoud’s Bathers complex near completion, the developer has submitted a revised plan for the Akuna St/Mitre 10 site to Council.

“We have been working through issues with our original plan with Council, including concerns passed on from the Joint Regional Planning Panel, and are now confident that we have a fully complying development,” he says.

Due to the value of the development, responsibility for approval lies with the Panel rather than Council.

A significant change to the proposal is that the delivery dock is now a one way system, from Shoalhaven St to Collins St, contained within the building rather than
being located in Akuna St.

In addition, all of the development is now below the 11 metre height restriction.

Artist’s impression of the Shoalhaven St side of the complex

As a result of the changes, the complex now has 86 one and two bedroom units (down from 91), and a larger commercial leasing area, with Aldi as the key tenant.

There will still be a level walk through arcade from Terralong St to Aldi.

Knowing how keen people are to have a second supermarket in Kiama, Mr Daoud says, “Once the DA is approved, people will be walking in the shopping centre two years later.” 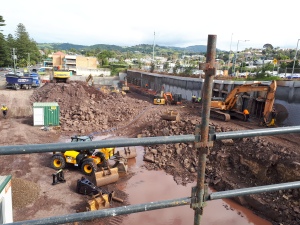 He says that geotech work has established the Akuna St site will be much easier to excavate than the Bathers Manning St site, which is mostly rock.

“It is a major excavation, but there won’t be need for hammering until we reach the very western side of the site where there is rock.”

What lies beneath the Mitre 10 site is yet to be established.

With the six months of earthworks for the Bathers site due to be completed at the end of July (the southern end is already finished), the build will follow apace with completion expected in 10 months.

“We are very experienced and we use the best people,” says Mr Daoud. “I have no doubt it will be completed in that time.”

He says interest in the complex has been very strong, with 85 per cent of the units and shops sold.

“People love the location and know our reputation for quality,” he says.

Geotech reports had prepared them for the toughness of the dig, which has seen 1000 cubic metres of rock carted away each day