Kiama’s contribution to finding an early warning system for shark detection, Project AIRSHIP, has attracted funding from the Save Our Seas Foundation, a Swiss-based organisation dedicated to the conservation of sharks and rays around the world.

The bright blue blimp was a regular sight over Surf Beach last summer. It’s aim is to develop an accurate, cost effective and easy to use shark detection system. using a camera, which beams images back to a TV monitor in the clubhouse. 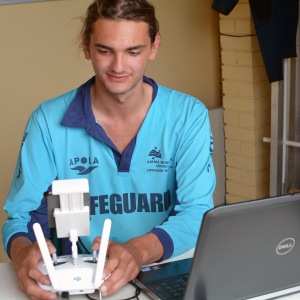 Kye Adams is conducting the trial as part of his PhD studies in marine biology at the University of Wollongong. He knows the beach well, having grown up here and been one of Council’s lifeguards for five years.

The camera gives a much better view than scanning the ocean from an observation post, but rigorous analysis of the data collected needs to be done to test the suitability of the equipment and the accuracy of the observations in all types of weather conditions.

The initial impression of the first trial period is encouraging, without the help of any live sharks.

“We deployed dummy sharks to properly trial how it performed in terms of allowing the operator to spot sharks,” Kye said.

“The early results are promising and we expect to develop a spotting rate for both shallow and deep water, which will give us a baseline from which we can make improvements.

“We need to be confident about these things before it can be deployed to other beaches.”

Kye says the blimp was successfully able to detect baitfish, stingrays and even a seal in water up to seven metres deep off Surf Beach and nearby Kendalls Beach.

“Our lifeguards were able to see there weren’t sharks hanging around the bait ball, which is something we are normally nervous about.”

Importantly, the blimp proved able to handle most wind and rain conditions, with lifeguards able to deploy it on average five out of seven days, handling gusts up to 35 kilometres per hour.

With ongoing costs a major consideration, Kye is pleased to report the cost of topping up the blimp with helium cost us less than $100 a week.

The trial is being funded by the Department of Primary Industry and Kiama Council.

The $11,500 from the Save Our Seas Foundation will go towards a second blimp with improved weather handling features, to be alternated with the original one.

In addition, a grant from the Australian-based Holdsworth Research Endowment will allow for the purchase of a multi-spectral camera to improve capabilities in poorer weather conditions.