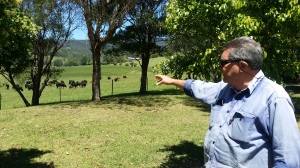 Graham Pike, one of the organisers of a public meeting to rally Jamberoo residents against another housing development on the village’s edge, is adamant that enough is enough.

“We are on the verge of losing the village character of Jamberoo,” he says. “There has been some very unsympathetic developments, particularly the latest two, and we can’t let this one go through.”

The land in question is 10 acres of rural land running along Golden Valley Way, on the eastern edge of Jamberoo township. The owner has put a planning proposal to Council to change the zoning to residential and allow 47 housing lots.

The land is identified as potential residential land in Kiama’s Urban Strategy, which was developed as part of the Local Environment Plan (LEP) in 2010, following consultation with residents.

He says if the development is allowed, Jamberoo will have experienced a 43% total increase in size over the last 4-5 years (including this proposal).

“I think Council should be rejecting this proposal, rather than sending it to Gateway [see below for explanation of the process],” says Graham. “I get the feeling many of councillors feel that way. There has to be a line drawn in the sand.”

While Mayor Mark Honey is keen for residents to give their opinions on the proposal, he says there’s a risk involved with the strategy
of rejecting it out of hand.

“If Council doesn’t put the planning proposal forward, and the proponent does so himself, if it is accepted by the Department of Planning, there would be questions as to why Kiama is not sticking to its planning instrument. They would question our ability to do the planning for the rest of Kiama.

“It could mean the decision is taken out of Council’s hands.”

The October Council Meeting decided to defer the decision to send the proposal to Gateway to allow for community input.

When councillors and planning staff attended the November meeting of the Jamberoo Residents and Ratepayers Association they stressed that community consultation was an important part of the rezoning process,  but it is usual for it to come at a later stage.

Opponents of the proposal were not reassured, and are going ahead with a public meeting to rally community support.

The Mayor, planning staff and other councillors are to attend the meeting, even though Mayor Mark Honey gave his commitment to The Bugle that a public meeting will be part of any Gateway process that ensues.

“Strong community opposition will carry a lot of weight,” he says. “It is just that further work needs to be done before informed decisions can be made.”

The Department assesses the application against statutory considerations and determines to issue ‘Gateway’, ie approval to proceed or refuse the application.

Council is at the initial stage with the Golden Way land, whereby the applicant has requested Council to prepare a Gateway report. If the application proceeds to, and is granted Gateway, a formal public consultation process would ensue.

Once the consultation period is over, a proposal that has been granted Gateway has to be considered by Council as a Development Application and it can still be rejected.