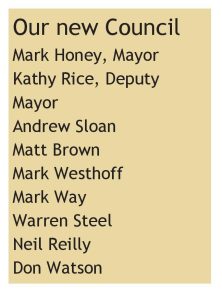 An Extraordinary Meeting of Kiama’s new Council has elected Councillor Mark Honey as Mayor and Kathy Rice as the Deputy Mayor.

He is not the first Mayor Honey Kiama has seen, as one of his forebears held the position over 100 years ago.

The Jamberoo Valley dairy farmer’s team polled strong-ly in the recent election, capturing 25.7 per cent of the group vote and 676 votes
for him below the line as an individual.

This resulted in Honey and his running mate Mark Westhoff from Gerringong being elected as councillors.

Despite prior indications Kathy Rice and Mark Way would stand for mayor, only Neil Reilly and Matt Brown nominated for the position.

“I decided beforehand that if Mark Honey got more votes than me then I wouldn’t stand,” says Mark Way.

The mayoral election was decided on first preferences, with Councillor Honey receiving five votes and the other two candidates two votes each.

Speaking after the vote, Councillor Andrew Sloan said that while the Greens team had exchanged preferences with Neil Reilly’s Community Voices team in the election, there was never any agreement to support his  bid for mayor.

“It would be difficult to justify giving the influential mayoral position to someone who only attracted a small vote from the community over a person who has the support of 25 per cent of the voters,” he says.

Despite high hopes, Councillor Reilly was one of the last two elected to the Council, along with Community & Labor’s Don Watson (see p 3), after 30 counts of preferences. Gavin McClure, who stood on Warren Steel’s Experience Counts team, was not re-elected.

Kathy Rice, again the only female councillor, is proud to have been voted in as Deputy Mayor. She ran against Warren Steel and Mark Way, winning on a second preference.

Mayor Honey and his deputy will hold their positions for two years, following the State Government increasing the length of the term.

Another local government reform saw the new councillors have to swear an oath or make an affirmation of office to ‘undertake the duties of the office of councillor in the best interests of Kiama LGA and Kiama Council and …. faithfully and impartially carry out the functions, powers, authorities and discretions vested in me…’

The first general meeting of the new Council will be held on Tuesday 27 September, from 5pm. Amongst other things it will be decided then which councillors will sit on the various committees and boards.