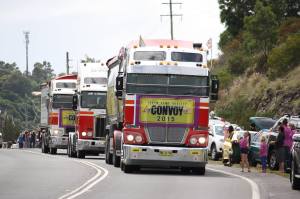 The launch of the 2016 People’s Truck for the i98FM Illawarra Convoy was held at the Kiama Leagues Club at the beginning of September, raising an impressive $36,000 on the night.

The idea of a People’s Truck sprang from Derek McMahon, owner of McMahons Transport, and in the five years since it has raised over $632,000 for Camp Quality.

As Derek says, “It is a great way for the community in the Illawarra to get behind a really fantastic cause. We can’t imagine what these families are going through. It is an honour and a privilege to be able to give them a hand.”

Formerly the Camp Quality Convoy, earlier this year it was announced the region’s biggest one day fundraiser would be broadening its charitable reach in 2016. The new name reflects its commitment to supporting a range of charities and individuals, including the founding beneficiary, Camp Quality.

As a result, the Illawarra Community Foundation has since been established with all funds raised from this year’s event being distributed to Camp Quality and a range of other groups and individuals via a submissions process.

Marty Haynes from i98Fm says, “With the amazing success of Convoy in our region over the past 11 years, we are now able through the Convoy Foundation to not only help with the great work Camp Quality does in the Illawarra, but also help many other kids and their families.

“Convoy is about doing it for the kids”

Details: The Convoy will leave Appin Rd from 8am on Sunday 20 November, and regroup at Albion Park for a day of festivities.