A map showing Boral’s current operations at Dunmore and the proposed new sites (in yellow), with distances to the river. Supplied by Boral.

Rather than use delegated authority to approve Boral’s modification to expand its sandmining operations at Dunmore (across the highway to sites east and south of Dunmore House), the Dept of Planning, Industry and Environment (DPIE) has deferred the final decision to the Independent Planning Commission.

In its letter to the Commission, the Group Deputy Secretary, Marcus Ray, said, “After a thorough assessment and consideration of community submissions, on balance, the Department considers that the impacts of the modification are manageable and that the proposed modification is approvable, subject to the recommended conditions.”

Friends of the Minnamurra River spokesperson, former councillor Richard Maitland, is disappointed the DPIE and other agencies have recommended approval, but welcomes the the announcement of a Public Meeting.

“It provides the opportunity for all interested parties to make submissions regarding this highly controversial project,” he says.

“This will be an opportunity to make your views known to the commissioners, either in writing or in person.

“Had it gone internally, it would have been given a rubber stamp.”

Mr Maitland, Howard H Jones of the Gerroa Environmental Protection Society and Paul Knight of the Illawarra Local Aboriginal Land Council, along with representatives of Boral, were given the opportunity to inspect the site with the commissioners.

“One of the points we made is that much of the vegetation isn’t hollow bearing, but the Bangalays are,” says Mr Jones.

“Although there aren’t a lot, they are an important part of the whole habitat value of the vegetation.”

He continues to be concerned that the proposed pit will degrade the vegetation adjoining the river, impact on the migration of mangrove vegetation westward as sea levels rise, and a lack of consideration for aboriginal cultural heritage, as the southern site is close to an area where a massacre occurred.

Mr Knight spoke about the way Aboriginal cultural heritage is treated in these situations. 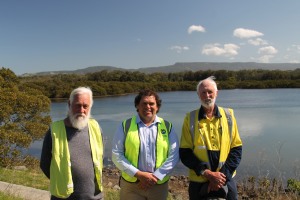 Former councillors Howard H Jones (l) and Richard Maitland (r), with Paul Knight of the Illawarra Local Land Council, after their first opportunity to visit the proposed sandmining sites. One pit is on the other side of the river, near the tall trees in the background.

“Everyone brings it down to the scientific value of specific objects rather than looking at it in the context of a whole landscape,” he says.

A spokesperson for Boral said, “Boral remains confident the application for the proposed modification, which is underpinned by scientific data and the input of independent experts, will stand up to the rigorous and thorough assessment of the DPIE and the IPC.”

The modification is opposed by Kiama and Shellharbour Councils, environmental groups and many residents.

Boral has distributed a brochure throughout Minnamurra, seeking to address these concerns, and explain the demand for the fine sand.

“They paint a rosy picture of their project, but I think it has reminded people of the whole issue and I hope it will motivate people to make a submission,” says Mr Maitland.

The determination the Commission makes can be subject to appeal.

The Commission will host an online Public Meeting from noon on Wednesday 28 October to hear directly from community members, at http://www.ipcn.nsw.gov.au/livestream

Those wishing to speak need to complete the registration form available at http://www.ipcn.nsw.gov.au by no later than 5pm on Wednesday 21 October.

The deadline for written submissions is 5pm on Wednesday 4 November.

Use the online portal http://www.ipcn.nsw.gov.au/have-your-say ; or email ipcn@ipcn.nsw.gov.au; or by post to the Commission at Level 3, 201 Elizabeth St, Sydney 2000