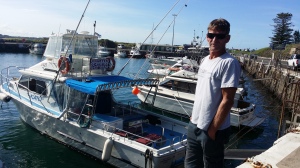 By the end of September, the wider community will be invited to comment on the Draft Kiama Harbour Revitalisation Plan, which will guide the development of the Harbour precinct over the next 50 years or more.

It will replace the 2014 Kiama Harbour Masterplan, which has largely been fulfilled.

As reported in April, Kiama was chosen for the pilot study for how the State Government can revitalise recreational harbours along the NSW coast.

The project is being managed by Transport for NSW Maritime Infrastructure Delivery Office, in partnership with Kiama Council, with the Government Architects Office playing a lead role in the architectural, urban and landscape design. The funding is coming from boat licences and other revenue from boat owners.

“It is a fantastic opportunity for us, as many Council strategies have clearly identified the revitalisation of Kiama Harbour as a key to delivering long lasting economic, social and environmental benefits to Kiama,” says Megan Hutchison, Economic Development Officer.

“It is looking at identifying short, medium and long term opportunities for revitalisation.

“While the funding is from boat owners, the plan being developed recognises the Harbour isn’t just for fishermen, but is a key jewel in our crown that we need to showcase.

“There is a lot of focus on how to connect the Harbour to the town centre and the rest of the facilities around town.

“The architects have spent a lot of time learning about how the Kaima community like to live, what they like to do, what their passions are and what their vision is for the future.

“As the pilot, we are also benefiting from having buy-in at Director level. The Government really wants this to work well, not just sit on the shelf.”
Due to COVID restrictions, the Draft has been prepared through online consultation with representatives of community groups and other stakeholders – including boat owners, game fishers, current leaseholders, the Kiama & District Historical Society, councillors, council staff, the local Aboriginal Land Council, the Kiama & District Business Chamber, Kiama SLSC and the Kiama Central Precinct.

Of the scenarios outlined below, the strongest positive response from consultations has been to creating a ‘harder working harbour’, as the keeping it ‘wild and small’ seems too tentative.

Once created, the Plan will facilitate funding applications for its implementation.

Current leaseholders in the Harbour area are unsure about the implications of the Plan for them.

A glimpse of what is envisaged

The Draft will be drawn from three scenarios that have been identified through analysis and consultation with key stakeholders, in line with the vision that has been developed:

Keep it wild, keep it small: Harbour enhancement – improving connections and safety in and around the Harbour for all users to continue enjoying the place with minimal intervention.

A harder working harbour: Harbour expansion – improving connections and safety, and expanding the capacity of the Harbour for boating activities, investing to protect infrastructure and businesses (new and existing)

Expanding for the future: Harbour expansion – improving connections and safety, a flexible Harbour and expanding infrastructure to cater for a growing market of locals and visitors, including more boating activities, business, services and facilities.

Common elements identified in all three scenarios are:

Other options include new breakwaters and moorings (currently being tested by the Manly Hydraulics Laboratory) and the relocation of the public wharf and boat ramp, helicopter pad and the Scout Hall.