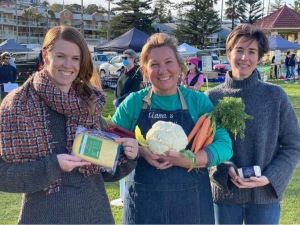 Kiama has scored a hat trick, with not only two of its artisan cheese producers again being selected as finalists in the Delicious Produce Awards, but the farmers’ market they helped found also being recognised.

“I’m just over the moon that the Kiama Farmers’ Market is in with a chance to be named Australia’s best,” says the Market’s Manager (and another co-founder) Tricia Ashelford.

“It makes all the effort we put in to keeping the Market open right through COVID worth it.

“We were determined to keep giving locals access to fresh, healthy food and to help give farmers a source of income when so many other channels had been disrupted.”

This year, Pecora Dairy has been recognised for its Curly Red, having won the national trophy last year for their raw sheeps milk Fetta.

The Pines has again been selected for its hard cheese, Pearl.

Each hopes that if they don’t win the national award, the other will.

The winners will be announced in October.