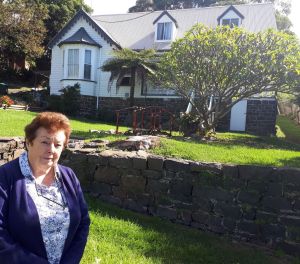 Sue Eggins outside the house in January

The developer of 47 Thomson St in central Kiama has taken advantage of a window of opportunity to demolish the landmark house.

The house was effectively destroyed the day before Council was due to meet to give it heritage status.

The President of the Kiama & District Historical Society, Sue Eggins, is very disappointed at the outcome, as the Society had lobbied for its heritage value to be recognised.

“I hope this will be a watershed moment in the protection of heritage in Kiama, so that something good can come of it.”

Mayor Mark Honey, whose family built the house and owned it until 1964, is angered by the demolition.

“I fully understand the commercial reality. He bought it to develop it, but it is disappointing that this is what has happened.

“He wouldn’t have lost any of the purchase value if the heritage listing had been place on it.”

The house had been under the protection of an Interim Heritage Order to allow time for its heritage significance to be assessed, but that six month protection lapsed on 21 June.

The report by a heritage consultant was hindered by COVID restrictions and access to the house only being granted recently, and was only received just in time to be included in the Business Papers for July.

The owner had obtained a Complying Development Certificate from a private certifier for the demolition of the building late last year, despite the DA for the site not yet being approved.

He chose to use it once the recommendation for heritage listing was made public in the July Meeting’s Business Papers.

As the staff report advised, “The applicant is now legally able to act upon their Complying Development Certificate to demolish the existing structures on the site.”

Notification was of the demolition was not given to Council, as required by law, and the fine that will be imposed is still being assessed.

The owner, Eric Chan, is proposing a residential apartment development for the site, with 12 apartments, associated car parking and landscaping.

He is currently completing an apartment block in Manning St, adjacent to the Uniting Church, and is also building a 16 apartment complex in Baroul Lane.

If the property was not assessed as being worth for listing as a heritage item, it had been hoped that at least an archival recording of the building would be done and some of the elements of it retained in the design for the new building.

“There was an intention that we could have at least some of its heritage value preserved,” says Ms Rippon.

“This is now not possible.

“To do what he has done clearly shows he had no respect for the process.”

The Assessment of Heritage Significance concluded that the site at would merit being included within an inventory of Kiama’s heritage places, as one of the city’s significant collection of 19th-early 20th century residences, and with particular reference to it being one of a number of buildings built in the area by John Simmons.

Key features of the building’s architectural style (a late 19th century builders’ Victorian gothic) are similar to other local buildings by Simmons.