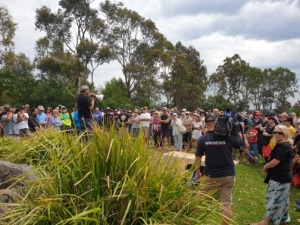 While the northern reach of the Kiama LGA ends at the Minnamurra River, locals are concerned about two developments proposed nearby, in addition to the extension of Boral’s sandmining in the area.

The first is $6.5 million in funding given by the State Government to Reflections Holiday Parks for the development of a 200-seat multifunction facility, 15 luxury eco cabins, 53 full-serviced campsites, a playground, walking trails and outdoor recreational equipment.

A petition to save Killalea from development has reached over 13,000 signatures, and the Save Killalea Alliance has been formed.

Kiama Downs resident Louise Ryan has joined in the protest, saying, “Enough already… can we please just preserve a sliver of space for humans to enjoy the natural environment as well as a few remaining creatures.

“I saw a wallaby on Mystics not long ago… how likely would that be if they build a road through the spit?”

The other is a proposal to turn the derelict mansion at Dunmore into an eco-tourism resort, even larger (and taller) than the building currently there.
Concerns have been raised about its size and how the known toxic hazards identified on the site will be managed.

More detail of both these proposals in future editions.