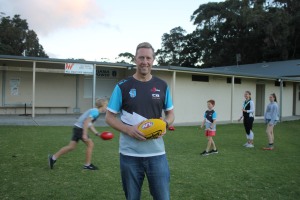 Above: Dirk Overden with some of the Club’s Juniors, in front of the existing clubhouse

With Council’s approval of its DA at the June Council Meeting, Kiama Power AFL Club is now ‘shovel ready’ to seek funding for a new clubhouse at its Bonaira Oval home ground.

Its current clubhouse will be replaced with a two storey building located on the footprint of its current site.

“We have 100 female players, and no change amenities for them,” says the President of the Junior Club, Dirk Ovenden.

“We also have no undercover viewing area or disabled facilities, and not enough storage for our equipment.

“Our new clubhouse is needed to look after the needs of our 360 playing members and our supporters.”

The Power, winners of last year’s Division 1 premiership, is one of the largest clubs in the Illawarra League, with 14 Junior teams and three Senior teams. It was a finalist in this year’s NSW Community Club of the Year.

The redevelopment plan also includes formalising the sealed car park area to increase parking from 25 to 40 spaces, with an additional 7-8 overflow spaces.

Girrawheen Avenue resident Neil Dell is frustrated that nearby residents’ concerns about traffic, parking, loss of views and its ultimate use as a social venue were dismissed so lightly.

“I think that Council has lost its ability to listen to residents.

“Five houses put in submissions about views being blocked, and they didn’t even come out for a site visit.

“They dismissed it out of hand, along with our other concerns. It’s not right.”

The approval does not allow the use of the premises for events or functions by third parties, and the Club would have to apply for a separate approval to allow this to happen.

Similarly, additional approval will be needed for a liquor licence.

Hours of operation have also been imposed – to 9pm on Fridays and Saturdays; to 7pm Sunday to Thursdays and on public holidays; and to 10pm on game days.