Kiama High will have to update its Wall of Fame, with one of its alumni being inducted into the Australian Academy of Science for his outstanding contribution in the field of mathematics.

The Academy is a fellowship of the nation’s most distinguished scientists, elected by their peers for outstanding research that has pushed back the frontiers of knowledge. 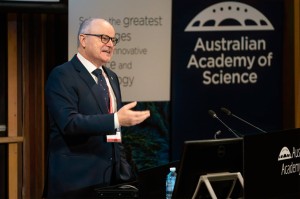 Professor Balding at his induction into the Academy

Professor David Balding, now at the University of Melbourne, sat his HSC at Kiama High in 1978, studying in Mark Gray’s maths class.

After a gap year in Sydney following his HSC, Professor Balding studied maths at Newcastle University, where he won the University Medal.  He then won a scholarship to do his PhD in mathematics at Oxford.

He has been on the Wall of Fame since 1997, when he was made a Professor of Applied Statistics at Reading University in the UK.

He stayed working at leading universities in the UK for 25 years before returning to Australia.

“Although all my study was in mathematics, I managed to get involved in the early stages of the human genome project, in the UK and the US,” says Professor Balding.

“I was also involved from the start in mathematical analysis of DNA evidence – measuring the weight of evidence even for small, contaminated and degraded samples.”

He shot to fame in the broader community when he was able to use this analysis to provide DNA evidence to convict a serial killer of raping and murdering two more women in Edinburgh, 37 years earlier.

Through mathematical modelling, and despite of the poor condition of the DNA after all that time, Professor Balding was able to positively identify the man.

His career has also seen him work on the genetic causes of disease, human genetic history, crop breeding genetics and dog genetics.

This has included investigating the validity of ancestry testing kits.

“It’s been an interesting career that I couldn’t have imagined when taking my HSC at Kiama High,” he says.

At the time he was better known as being one of the nine Balding siblings, who lived near Kendalls Beach.