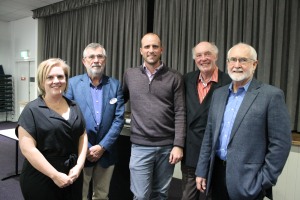 For most of its 172 year history, the Kiama Show Society’s Executive has been drawn from members of long-standing local farming families, but over recent years this has changed.

“Fifty years ago there were 96 dairy farmers in the area and now there are only ten, and the make up of the Committee reflects that,” says the incoming President Neil McLaren.

As someone who always wanted to be a farmer, Neil ended up helping farmers through his work as an entomologist for agricultural chemical companies and he now runs beef cattle locally.

He joined the Show Society when he moved to Kiama with his wife Maree to start their family in 1988.

“The Show has long been at the heart of our community, and it has been a great way to get to know people and make a contribution.”

He’s spent the last ten years on the 50 strong Committee, helping to run the Show, including the last two years as Junior, then Senior Vice President.

He will be continuing with the initiatives of the outgoing President, now Vice President, David Barnes, to make the Show more relevant to a wider audience.

Despite best efforts, last year’s Show was not a financial success, with gate takings down 30 per cent on the previous year resulting in the fourth loss in six years.

“We’ve looked through the barrel of this gun over the last 20 to 30 years, and there is a strong determination to get the formula right.

“We’d like to get back to the days when everyone comes to the Show.

“We need to be acknowledged as a vibrant event with relevance to the local community.

“We’ve already got a good product, but we need to market it better, to locals and people already here for their holidays.

“Back in the old days there wasn’t much competition, but now there are so many other things to do at that busy time of year.

“We’ve got to find ways to get the young people back, and we have to generate more revenue for the Society within the grounds.”

The Executive will be putting some proposals on how to do this to the June Meeting of the Committee.

“We’ve been looking around at what other Shows do, and ways to make our finances not so dependent on gate takings,” says Neil.

The Society will be conducting a membership drive during the year to building on its existing 600 members.

A new constitution was adopted at the AGM to fit with state requirements for governance and to reflect current and future needs.

In one of the changes, the Committee is now limited to 40, rather than 50 members.

“Out of respect for their contribution, existing numbers over 40 are ‘grand-fathered’ to stay on the Committee until they decide to step down,” says Neil.