Members of Kiama Bowling Club and Leagues Club have been told the Leagues Club is interested in having discussions with the Bowls Club as to how it can help keep bowls an active sport in Kiama. 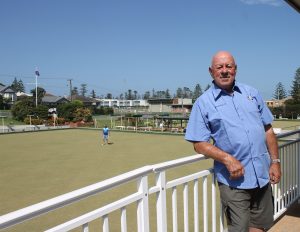 As reported in the last issue, the Bowling Club is looking for ways to secure its long term viability.

It has had approaches by a number of clubs, and a recent general meeting gave the Board the authority to investigate the various options, by a resounding vote of 134:5.

Apart from Kiama Golf Club, which has called for expressions of interest from other clubs interested in merging, Kiama Leagues Club is the only other club to go public about its interest.

While stressing it is early days yet, Mr Willis comfirmed that an informal offer has been made to the Bowls Club.

“We a genuinely a community-based club and we’d like to see bowls kept alive and well in Kiama,” says Leagues Club President, Steve Willis.

A general meeting of the Bowling Club was repeatedly told that they did not have the option of taking out a loan, as they had no capacity to service it.

In a Notice to Members, the Leagues Club Board said, “We do believe the two clubs would complement each other and both parties would be stronger for the union. If the Bowling Club chose to move in another direction we would wish them all the best Our hope is that local bowling remains an option for many years to come for the residents of Kiama and indeed a number of our own members.”

It is understood members of the Bowling Club Board have visited a number of interested clubs already. The identities of these possible suitors currently remain private.