Since leaving the police force, Kevin Sullivan has relished his new role of being a stay at home dad and having time to concentrate on his lifelong love of music. 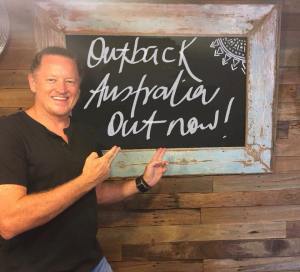 The popular local singer/songwriter recently launch-ed his album, Belonging, and is thrilled it has debuted at number 2 in the iTunes Australian country charts.

“I’ve dreamt about doing an album of my own songs for a long time,” says Kevin. “It shows you are never too old to follow your dreams.

“We live in such a supportive community, I feel that everyone is proud that I’m giving it a go.”

This year has been a big one in other ways for him, as earlier this year he was chosen as one of an elite group to participate in the Senior Academy of Country Music at Tamworth.

The two week intensive, invitation only, course is run by the Country Music Association to encourage the next wave of stars. It focused on all aspects, from song writing and collaboration to business management.

“It was such an amazing opportunity to learn from industry superstars, such as Casey Chambers, Roger Corbett of The Bushwackers, Lyn Bowtell, Amber Lawrence and Adam Brand.

“I was so energised to be around people with such a common purpose and drive, and that was capped off when my song, Outback Australia, was chosen to be the grand finale of the graduating concert.”

It also led to the song being rerecorded before it was launched as the single for the album, with backing vocals from Lyn Bowtell and Kevin Bennett.

“It also features fiddle and mandolin from Tim Crouch, an American legend who has played for Alan Jackson, Garth Brooks, Charlie Pride and Dolly Parton.

“I’m so proud he agreed to play for me.”

While Kevin can often be heard playing all genres of music down at the Kiama Farmers’ Market, country music is closest to his heart.

“It’s just a little bit more real, and somehow Australians have a bit more of a connection with it.”

Some of the songs on the album reflect experiences he’s had in years of playing gigs around the outback, while others are to do with family and other forms of connectedness.

The next opportunity to hear him play is Saturday 9 June at Kiama Golf Club, 6pm, as part of the Country Gold Festival, or buy his music on iTunes.