Rather than approve or decline developer Nick Daoud’s latest proposal for the Akuna St/Mitre 10 site, the Southern Joint Regional Planning Panel (the Panel) has deferred its decision to allow the developer to amend the plans once more. 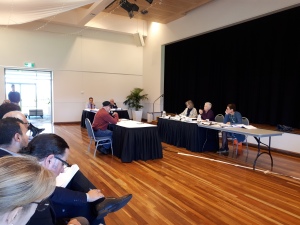 The Panel considered submissions from the public and a report by Council’s consultants on the proposal (necessary because Council owns the land) which recommended its approval. It then passed a motion requiring the developer to, amongst other things,  remove one level from the larger residential building on the western side of the site, and replace this with communal open space to achieve height compliance on that building and closer to compliance to the overall communal open space ratios.

Other requirements are to do with access, parking, canopy planting and design differentiation for the larger building.

When contacted, Mr Daoud said he would prefer not to comment at this stage.

His current option to buy the land expires on 9 June, unless Council grants a further extension. Purchase of the land depends on a DA being approved for the site.

Amongst the people who addressed the Panel at its public hearing, two spoke in favour of the DA. While they didn’t state so at the time, it has been revealed that both are sales consultants for the developer’s subsidiary, St Trinity Property. Both say they were acting as individuals in favour of the development at the time.