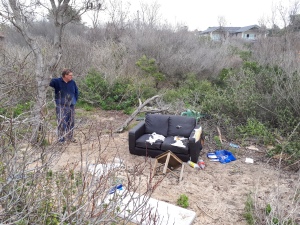 Having invited himself along to a meeting being held at Jones Beach to discuss the state of the vegetation (reported in The Bugle 17 Feb), Kiama Downs resident John Hansen is frustrated at how little action has resulted.

“There was a meeting with the General Manager Michael Forsyth, other Council officers, the Gerroa Environmental Protection Society and other groups, but no residents,” he says.

“I went over, and Mark Hume, also of Jones Beach Landcare, joined us, to give a local perspective.

“As a resident still involved in the Landcare group I find it offensive that constant attention is paid to someone who does not reside at Jones Beach and is not an elected member of council.

“Why should the views of people who don’t live here be given such weight?

“Global warming isn’t going to be stopped by a row of tea trees.”

At that meeting on 1 February, Mr Hansen raised the issue of anti-social behaviour in the dunes, and the residual left behind.

“I showed them the filthy camps within the dunes that are regularly used for drinking and drug taking, and a council officer said the rubbish would be removed within the week,” he says.

“It is still there, despite repeated requests.

“I often go into Kiama very early on weekends and am amazed at the small army of council staff picking up rubbish, blowing leaves and emptying garbage bins. In most cases this is for the enjoyment of visitors who do not pay rates and leave the mess.

“As a rate payer, I ask what does it take to have Jones Beach cleaned up?”

He says many people who joined the Landcare group have given up in frustration due to a lack of follow-up by Council to poison the lantana they cut and take away the debris.

“It has grown back and is seeding again, so the effort has been wasted.”

Mr Hansen is also unimpressed by the time and cost involved in preparing another Plan of Management to adjudicate over the best way to manage the dunes.

“We are going to have inaction for at least another year, possibly longer, while they wait for the new plan that is going to cost over $100,000,” he says.

“The most disturbing thing is that Masterplans were devised in 2002 and 2014 but they weren’t implemented.”

Council’s General Manager says that some rubbish has been taken away, and a bigger truck has been scheduled in for next week. He also says Council will meet with the Landcare group to discuss the resources needed.

One response to “Jones Beach inaction”