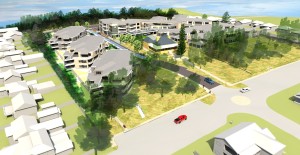 Construction has started on the $103 million Blue Haven Bonaira aged care centre (formerly known as the Kiama Aged Care Centre of Excellence) at the site of the old Kiama Hospital.

Richard Crookes Construction will build the 59 independent living units and the care home which will accommodate 134 residents.

The complex is expected to be complete by the end of 2019.

“The whole site will be developed in a single stage, with all components of the site being finished at approximately the same time,” says Council’s Director of Blue Haven Care, Clare Rogers.

“This will cause the least issues both for neighbours, as all construction will occur at the one time, and for any incoming residents, who will not have to move into a new home that is still an ongoing building site.”

The NSW Government has provided $18 million towards Blue Haven Bonaira, including $8 million through the Restart NSW Illawarra Infrastructure Fund.

The Australian Government is providing $2.39 million through its Community Development Grants program.

The Independent Living Units will be allocated by ballot, the same manner used to allocate units at Blue Haven Terralong.

Residents from the existing Blue Haven Care Home in Havilah Place, will be relocated to Barroul Care Home.

Kiama Council is examining options for the Havilah Place site once it is vacant, including moving Council’s Administration Centre there.