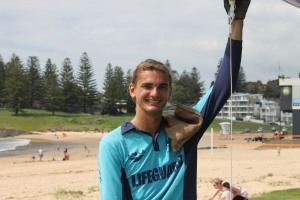 With the help of a US$11,000 grant from the Save Our Seas Foundation, and continuing support of Kiama Council and the Department of Primary Industries, PhD student and lifeguard Kye Adams is enthusiastic about continuing his research into the blimp’s effectiveness as a shark spotting and safety device.

“We live stream the footage down to the lifeguards, giving them an extra vantage point to watch for sharks,” he says.

“We can also watch for rips and swimmers in distress.

“It provides lifeguards with an additional tool to keep people safe.” 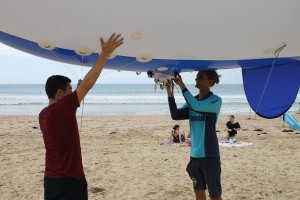 The improved version for this summer includes a new custom built camera with 10 times zoom and a higher definition screen, as well as being rated for higher wind speeds.

“This will mean we can quickly identify what an object is – whether it is a dolphin, seaweed or a shark.”

Kye has spent the intervening months analysing the data collected last year, and while the results are yet to be published he says they are very positive.

“I spoke at an international conference of marine scientists during the year, and everyone is excited about its potential for managing sharks and other potential hazards.”

Kiama’s blimp is shaping up to be a cost effective way to ensure beach safety.

“We envisage the roll-out of the programwill be able to be funded through advertising revenue,” says Kye. “The running costs are minimal and it dovetails with existing patrol measures.”

The blimp will be tethered at Surf Beach over summer.

“This is our busiest beach, and also one of the most dangerous,” says Supervising Lifeguard, Andy Mole.

With 29 lifeguards patrolling every beach in the Kiama LGA seven days a week, from 10-6pm, in addition to volunteer lifesavers, he says beach safety relies on people doing the right thing.

“We are asking everyone to swim between the flags. In particular, take notice of the signs at South Bombo and don’t swim there. There are rips everywhere.

“If you do spot anyone in trouble there, use the emergency radio we’ve set up to call for help.”