A memorial to the first Australian soldier to die on active service, Robert Weir, has been restored, with a rededication service on Saturday 15 July. 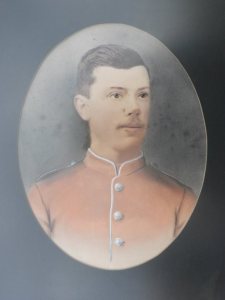 Robert Weir was living and working at the family farm, Bush Bank on the Kiama Bends, when in 1885, along with four other Kiama men, he enlisted to go to faraway Sudan as part of the New South Wales Contingent to help quell a rebellion.

It was the first time soldiers from a self-governing Australian colony participated in an Imperial war.

Private Weir died of illness contracted while there and was buried in the Sudan. He was just 21, and unmarried.

Public subscription raised the money for the sandstone memorial, and a community war memorial grant from the NSW Department of Veterans Affairs has funded its restoration by local stonemason, Brad Rimmer.

When the monument was first dedicated at Bombo Cemetery in 1886, Mayor Mark Honey’s great uncle was the local militia captain and was in charge of the unveiling. 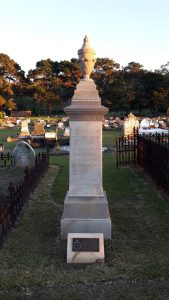 “Over 100 horsemen paraded from Kiama town down to the cemetery along with about 200 residents,” says Gary McKay, Vice-President Kiama – Jamberoo RSL Sub-Branch.

“That was a big turnout indeed given the date and population of Kiama at that time, when a lot of people worked on Saturdays.”

Links through the ages abound, with over a dozen members of the Weir family, the Mayor and the Kiama Light Horse attending the rededication.

“Apart from its local significance, this monument is important in that it commemorates the death of the first Australian to die on active service,” says Gary McKay.

“An explanatory plaque has been placed next to the memorial giving a brief outline of the significance of the monument.”