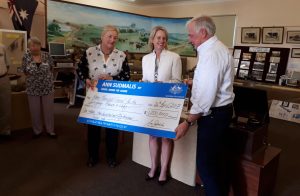 The Federal Minister for Regional Development, Fiona Nash MP, and the Member for Gilmore, Ann Sudmalis MP, have presented Kiama Council with a cheque for $1.25 million towards the new Gerringong Museum and Library complex.

The money, which was promised in the last election campaign, will make a significant contribution to the $3.5 million project.

The plans, which are still being finalised, will see the Museum move into the renovated School of Arts building, on Blackwood Street, and a new library built on the site of the current museum.

“The money for the project is in our budget for the next financial year,” says Council’s General Manager Michael Forsyth.

He expects work will be able to commence either late this year or early next year, given the time needed for the tendering process.